The annual La Paz tradition of Alasitas (24 January) involves buying tiny replicas of the things you want the coming year, and offering them to the Ekeko, who carries them (literally, the things are supposed to be sown or somehow attached to him) during the year. Plaza Roosevelt was filled w/ tents selling all sorts of tiny things and food & drinks, as well as regular artesanias like wooden & ceramic crafts.

The pictures above show the assortment of things available. You'll also notice that there's tiny food (pastries), which are meant to be eaten to ensure you won't go w/o during the year. One of the pictures has an Ekeko, w/ a lit cigarette in his mouth. Ekeko requires much attention; among other things, you're supposed to give him a smoke at least every Tuesday & Friday. One picture shows a yatiri (Aymara witch doctor) giving a blessing. You're supposed to have your tiny items blessed in a ceremony called a cha'lla at noon.

I planned on just observing the festivities, and perhaps buying a few nice artesanias (I got some awesome ceramic cereal bowls). But. When in Rome, right? In the end, the excitement got to me — and I ended up buying a host of little items and even having a yatiri bless them w/ a cha'lla.

That was interesting. As noon neared, the crowd was growing larger and whipping itself up into a frenzy. There were precious minutes left to buy the little icons. The most popular last minute items were stacks of $1K (sold at Bs.1), since I guess money can buy anything.

The crowds were already starting to press against the little groups of yatiris. Despite warning from a passerby that I was being cheated if I paid for a cha'lla before noon — the blessing's supposed to be made at 12 o'clock on the dot — I decided to go ahead and pay Bs.5 for my cha'lla. After all, I don't really believe in this stuff.

The yatiri assured me going before noon was fine, perhaps better, since he wouldn't be rushed. So I placed all my tiny things on an aguayo cloth. The yatiri started w/ "en el nombre del Padre, del Hijo y del Espíritu Santo" and then proceeded to rifle through a prayer/incantation in Spanish & Aymara, mentioning more Catholic saints & indigenous deities than I could imagine. He burned incense, scattered flower petals on my little items, and then sprinkled alcohol over them.

The whole ceremony took about two minutes. Then he placed all my things (along w/ the flower petals) in a little plastic bag, gave it to me, and poured alcohol on each of my hands. As long as I have faith, he told me, I'd get what I want. Oh, and as long as I gave the Pachamama (Mother Earth) something to eat on August.

So. What did I end up getting? Here's the picture. 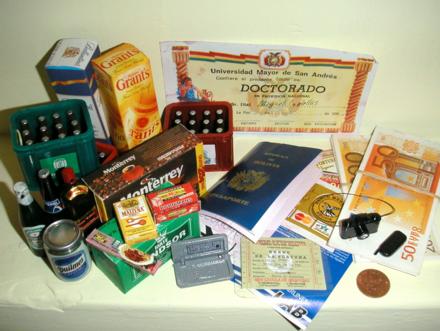 The first thing I bought was a tiny passport (which included an airline ticket, a winning lottery ticket, traveler's check, and a credit card. Nice, eh? But it was a Bolivian passport. So I figured I should get a Bolivian ID card to go w/ it. Another table was selling stacks of money. Since I was already traveling, I figured I'd like to go to Europe and a stack of several thousand Euros would come in handy.

I also figured I'd buy myself my doctorate (even if it's not from WMU, but from the UMSA) and save myself the trouble of a dissertation. I could use my European vacation as a reward. Then I thought that since I'm buying myself some nice things, why not get a new laptop (they even had a Macintosh model), a new digital camera (for all my vacation photos), and a better cell phone. Note that it's smaller than the penny I set up in the photo to show scale.

After that, I figured I should get my new café & pub off to a good start. So two cases of beer (Paceña & Taquiña) and a case of Coca Cola would be a good start. But more beer variety is better, so I got some Quilmes & Heineken, too. Some Ballantine's, Grant's, and Johnie Walker would be a good start to a bar. A box each of coffee & tea to round it out. Then little tiny boxes of spaghetti, cinnamon tea, and maizena because ... well ... because they're incredibly tiny.

Unfortunately, I could find neither a coffee machine (yet alone an espresso machine) nor a tiny motorcycle (I'd pretend it was a moped). But. I'm guessing I'm off to a pretty good year, eh?

Listed below are links to weblogs that reference 'Images from Alasitas' from Living in Latin America.
" about " membership " network

Poll
Search
Living on the Planet